Sardinia is really rich of waterfalls during the winter or during the rainy season. "Su stampu e su turrunu" waterfall is basically unique in its context here in Sardinia, due to its morphology. Infacts, water has digged a hole during the ages, making a wonderful scenery really and much looked for by landscape photographers of the island. The area surrounding the waterfall is an amazing woodland, rich of many other beauty, that deserve to be seen, mostly in spring when the temperatures are much warm and pleasant.

The path doesn't present many problems, and it's well signed, so I think you won't have any issue to get the waterfall. But, as always, if you need more information or need a guide don't hesitate to contact me.

How to get there

You can arrive from Seulo village or Sadali village, using the SP8 road, then you need to follow the secondary road until you reach the first car park (#1 car park), or if you have got a off-road car, you can continue following the off-road until you reach the second car park (#2 car park). From there the waterfall is far about 10 minutes by foot, as showed in the map below. 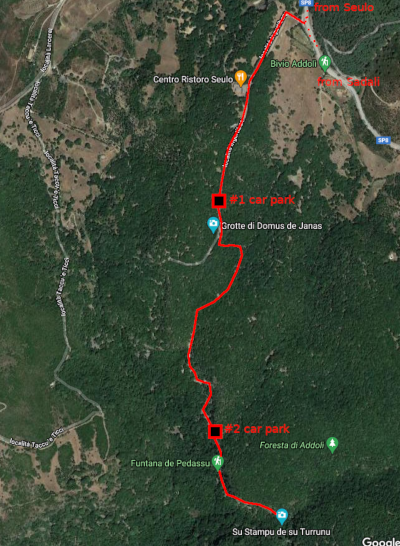 The waterfall, the woodland and streams as well.

Other times of years

As I wrote before, the best period for taking pictures of the waterfall is during the winter, and maybe in spring.

In the area near the waterfall there's another waterfall, "piscina e licona" not so far, maybe 2 kilometers from the #2 car park, and a cave really interesting to see. The cave, called "grotta is janas" is near a public park following the main road SP8 in Sadali direction. 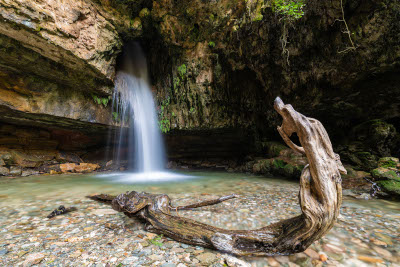 Mistras pond, for wildlife photography,is the perfect spot where to go. Really close to Cabras village, for eating or having a rest, the pond of Mistras is interesting for its birds. There are different species in the pond that live throwout the year, like cormorants, ducks, flamingos, hakws, sand pipers and many others, even though the most interesting specie is the osprey, the star of the pond. For photographing the osprey come people from all region of Italy, due to the semplicity. Infact you can take pictures directly from the car, without get the birds in trouble, unless you get off the car (and it should be better to not get off, just to not scared the animals). Then you need to be carefull because the area is a private property used by fishermans, even though you don't need to ask for a permission.

There isn't any problem due to the car. As always if you need more information or need a guide don't hesitate to contact me.

How to get there

You can arrive from Cabras village, using the SP6 road, until you'll reach a crossroad as showed in the map below. or from the main road 'll arrive from Santa Maria Coghinas village and it whould be better using a satnav (check the map below) until the car park. 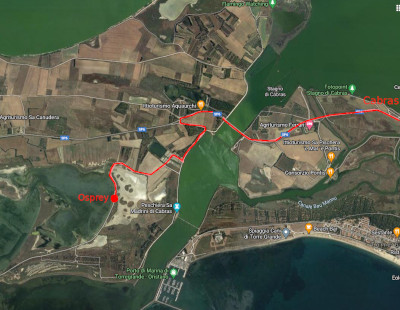 The osprey and other birds

Other times of years

Ospreys only in winter and spring until May, the other species all over the year.

In the area near the pond there is Cabras, a really nice village where to eat something, or to stay for a short holiday and, mostly, for the giants of Mount Prana museum. About the museum check before the website in order to know the opening days. 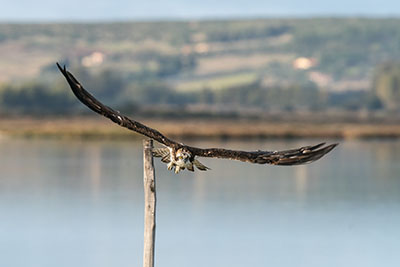 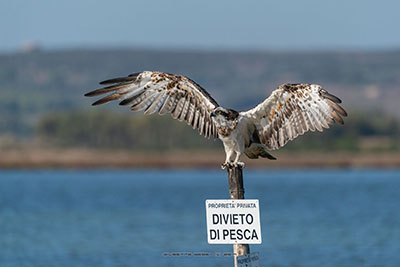 Sas lapias is a really particular and unique Sardinian waterfall. The most interesting aspect of this waterfall is that it's triple. Despite there is only one stream, before the jump it splits in three part making three distinct waterfalls. At the bottom there is a small lake, but it is quite uncomfortable staying there because there isn't enough space for taking pictures safely, so be careful.

Reaching the place is pretty easy and there is parking for the car. Going to the waterfall is simple and following the path marked in red on the map would allow to arrive to the waterfall without big issues. As always if you need more information or need a guide don't hesitate to contact me.

In a place, where you wouldn't expect a so beautiful scenery, there is a fantastic waterfall. In a small canyon there is this amazing watefall, but only during the reany season, unfortunately as many others in Sardinia. Beeing one of its most important features, it becomes really interesting at the eyes of a landscape photographer, just because you can find it only for short time during the year. Lu tuvu make a jump long over 30 meters, maybe more because I've never calculated how it is tall. The waterfall finish in a small lake where take some pictures, but it is possible to photograph it even from the top.

Depending on you are interested to, there are two trails for reaching the waterfall. The trail 1 is for taking picture from the top, trail 2 for the bottom. In both trails I highly reccomend you to wear wellightons in order to cross the stream, otherwise you won't be able to do anything. Be carefull because you need to pass throw some private property, so where you find some gate, remember you to close them. As always if you need more information or need a guide don't hesitate to contact me.

Rio Salonis waterfall is a stunning waterfall immersed in wonderful wood. It is not so big, but its stream is very varied and rich with a lot of small pools. The waterfall itself is pointed by the red placemark in Google Maps, but in the place marked with the number 1, there is a really nice stream, that goes until the waterfall, where you can take a lot of pictures very interesting. Also, the wood is very nice, rich with beautiful trees and rocks. Rio Salonis waterfall is near the village of Morgongiori, a small town in the Sardinian hinterland.