Located in the south part of Sardinia, this area is easy to reach and rich in nature, where you'll be able to admire great sceneries, mostly the Cagliari's gulf.
Access rating

It isn't very simple arriving there, so I advise you to use a satnav or Google maps on your phone, using the maps coordinates. Once turned up on the location, go down in the evident path near the road (there's a place where to leave the car), until you reach the waterfall. Be careful in wet days because it might be slippery, and it should be better using a couple of wellingtons to cross the stream somewhere.

The waterfall and the small lake below it. Not so far the waterfall there's the famous mushroom rock, a rock shaped from wind and rain, and some giant tombs, always nice to see.

Other time of years

Mostly in winter, during or right after the rain season.

As I wrote before, there are some interesting spots, like the giant tombs: ancient rocks made by man thousands of years ago. 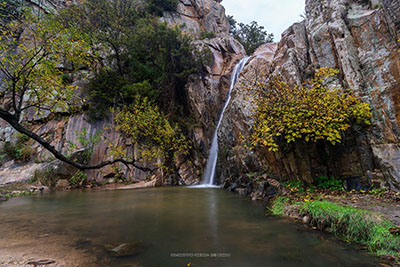